A Report on the Visit to Newport by the Mayor of Kutaisi Mr Shota Murgulia, Georgian Ambassador to the UK – Tamar Beruchashvili, Teona Shekiladze, David Tsitaishvili, Vladimer Jghamadze and David Megrelishvili.

Between Sunday 18th June and Wednesday 21st June Newport Kutaisi Twinning Association along with partners at :

welcomed a delegation lead by the Mayor of Kutaisi and the Georgian Ambassador to the UK. 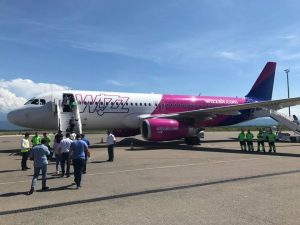 The Georgian visitors arrived on the inaugural direct flight from Kutaisi Airport to London.

The Mayoral party was late coming through customs and after hugs and photographs, the guests were transported to Wales. The evening and visit fell in the middle of the hottest spell of weather in Britain for forty years. Sonia (Our Chairperson) was waiting to welcome the visitors on behalf of the Association and then we left our tired friends to recover from their long journey. 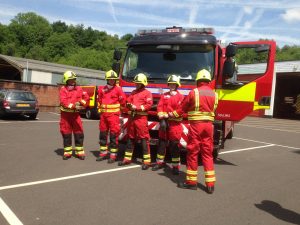 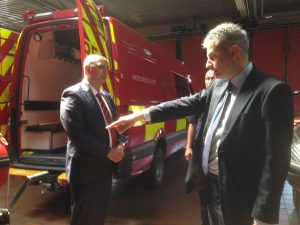 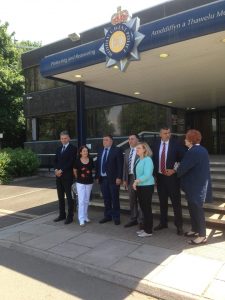 Rosemary, Sonia and Phil Rogers met our refreshed visitors and they were joined by
Newport West Assembly Member Jayne Bryant. Together, they took the visitors on a
conducted tour of the Gwent Police Headquarters and the Fire & Rescue Station at Malpas.
Both visits were planned with the help of Police Superintendent Glyn Fernquest who organised a fascinating programme which included demonstrations of the latest police and
fire fighting techniques and equipment.

After lunch at The Priory, Rosemary took our friends to the National Assembly for Wales in Cardiff where International Officer Al Davies gave them an informative tour of the building. He explained the links that have recently been formed between the Assembly and the Georgian Parliament, links which were instigated by Rosemary when she was the
Assembly’s Presiding Officer.

The visitors enjoyed an afternoon and evening exploring Wales’ capital city before returning to Caerleon. Later that evening the Georgian Ambassador to the UK, H.E. Tamar Beruchshvili and Embassy Counsellor Ekaterine Kokaia arrived at The Priory to participate in the visit by the Mayor and his colleagues 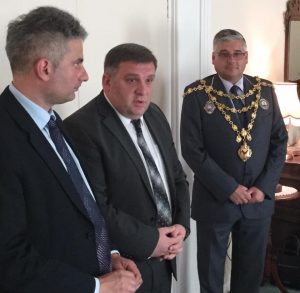 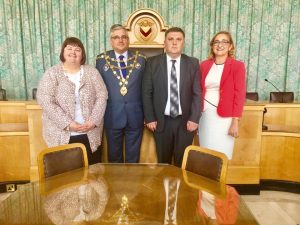 The City Council Leader Debbie Wilcox gave a presentation of the management and development of Newport at this time. She was optimistic about the future of the city while stressing that financial restraints are still paramount. Mayor Murgulia and Ambassador Beruchshvili both asked questions and thanked the Leader for her interesting presentation. Sonia added her thanks on behalf of the Association.

Campus Director Keith Backhouse, Dr. Shirley Egley and Tim Hartley then outlined their
plans to strengthen links between the two cities. Keith Backhouse explained that following Coleg Gwent’s participation in the 2016 civic visit to Kutaisi, he and a group of staff and students from the College’s School of Care intend to return in October and provide practical help to the City’s `Bridge Centre ` for children in need.

Tim Hartley reported that GOL’s aim is to help the local community in any country where the Wales International Football Team plays an away match and, as Wales will be
playing in Georgia in October, he and several fellow GOL members, are keen to assist
Coleg Gwent in their project. Dr. Egley explained that she and her colleagues at USW’s
School of Education are exploring ways to rebuild the long established links between the
city’s two Universities now that the University of Wales Newport has been merged into the
USW.

The formal part of the morning ended with a buffet lunch where we were joined by NKTA
Executive members Vera Brown and Cllr. Stephen Marshall. After speeches, exchange of
gifts, and photographs the visit to the Civic Centre concluded with a tour of the Civic Centre’s magnificent murals. 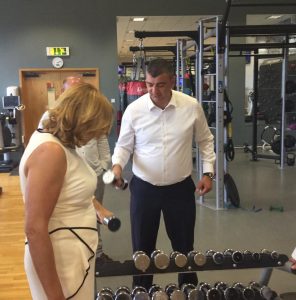 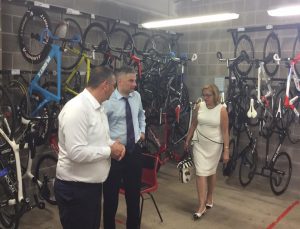 In the afternoon Rosemary, Derek, Stephen, and Phil took the Georgian visitors to the Newport Sports Village where they were welcomed by Director Steve Ward. Newport’s sports facilities are outstanding and central to the Olympic training of both UK and overseas athletes. Steve guided us round the gymnasium, velodrome, swimming pool and other facilities and explained how they are administered. 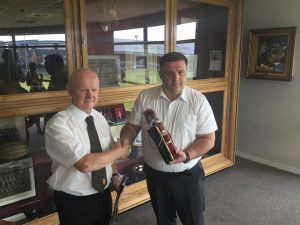 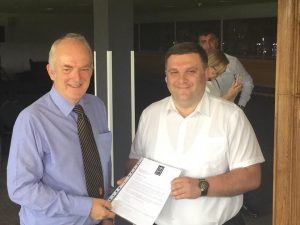 Next stop was Newport Rugby Club where Museum Director John Barrett showed the
visitors the gifts that have been donated by Kutaisi Rugby Club over the past 25 years
including a crystal rugby ball donated by KRC during the first ever visit to Kutaisi by
Newport’s civic leaders in 1989. Other gifts to the Newport club include a dagger donated by two KRC trainers and a translator when they were hosted by NRC for four weeks in 1998. Mayor Shota Murgulia formally handed John Barrett a letter addressed to the NRC Club Directors requesting a further strengthening of links between the two Clubs together with a bottle of Georgian wine. In return, John presented the Mayor with a NRC tie. 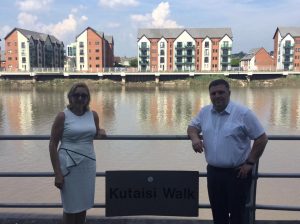 There were two more stops during this busy afternoon – first to Kutaisi Walk where the
visitors admired the plaque in Georgian, Welsh and English commemorating the 20th
anniversary of the twinning and then to the city centre to see the recently opened Friars
Walk development.

This was the hottest day in Wales since 1976 and although everyone who participated in the day’s programme enjoyed it, by late afternoon we were all pleased to have a short break before the Farewell Dinner at The Priory that evening. 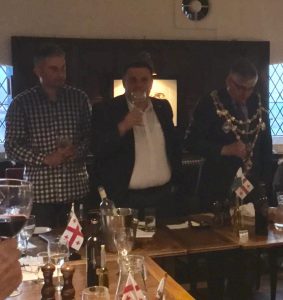 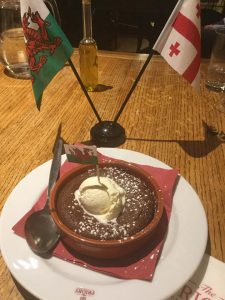 The evening was a huge success and started with a drinks reception in the hotel garden.
Those attending included our seven distinguished Georgian guests, the Mayor and Leader
of Newport City Council, Dr. Stephen and Eithne Hunter, Caroline McLachlan, Keith
Backhouse, Peter Landers, Cllr Stephen Marshall, Alice Butler-Bright, Clare Munro, Nerys
Lines, Phil Rogers, Sonia, Rosemary and Derek Butler. Toasts were drunk and speeches made, there was a constant noise of chatter and at the end of the evening we drifted into the garden and continued our friendly discussions long into the night. 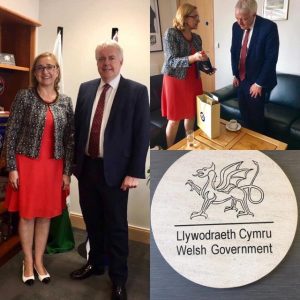 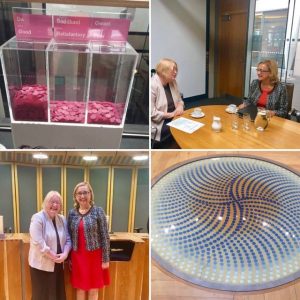 The Ambassador departed for formal discussions at the National Assembly for Wales. The
Association is delighted that the Ambassador chose to visit Newport and we look forward to welcoming her again in the future.
As our ever welcome guests prepared to leave we all agreed that the Mayoral visit had been
both worthwhile and enjoyable and a number of useful contacts had been made that can be built on in future. Finally we waved goodbye to our friends as they set off for a short visit to London before flying home on the 22nd.