Posted on December 3, 2015 by Catherine Philpott 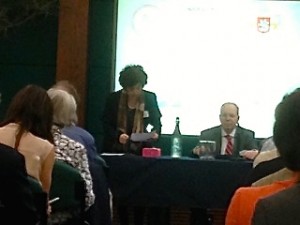 HE Prof. Gachechiladz stated that 6% of GMP was generated by tourism. In 1991 the USSR was dissolved but borders remained as per Soviet republics. In 2012 there were 700,000 Russian tourists coming to Georgia drawn by the temperate climate and the Black Sea coastline but there had been the need to address security issues. 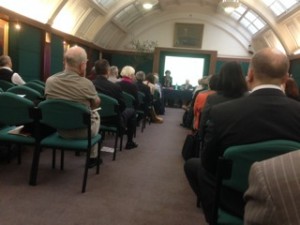 By 2014 it was easier to do business. There have been many improvements put in place in regards to human rights and democracy since 2012.

Today almost no one is afraid to walk out at night. There is less than 5% loss of property. Lack of safety is no longer an issue.

Georgia would like to see more tourists from UK even though there has been a 70% increase since 2013.

Question – Why there is a lack of direct flights from UK?
Prof. Gachechiladz replied there was a rumour that Easyjet is looking at providing a
service. He added that there is a new airport in Kutaisi with flights from Istanbul and other airports.

There are plans to develop small tourist companies to promote Georgia.
It was suggested, from the floor, that themed tourism was an idea, eg – wine tourism as next year the World Wine Conference will be held in Georgia.

SPEAKERS
1. Teona Chachua from Brand Development Department of Georgian National Tourist Administration. “ The Tourism Potential of Georgia”.
Ms. Chachua said that Georgia was unique – it was at the crossroads of Europe and Asia – the silk route to Turkey from the Far East. Lifestyle rated Georgia to be 4th out of the 10 safest countries in the world with police service controlling highways day & night.

3. Giorgi Kalandaze gave an overview of “ Adventure Tourism in Georgian”.
Ski Resorts – Gudauri at 3000 meters was only 50 minutes journey from Tbilisi.
Mestia, another beautiful resort at 1800 meters with ski lifts will be opening next year. Bakuriani is a suitable ski resort for beginners.

Many articles on travel to Georgia appear online. International hotel chains have now
been built throughout the country including Radisson, Marriot, Hilton etc. and although
there are many direct flights to Georgia there are still none from the UK at present. Apart
from the tourist numbers from Russia there was a 7% rise in visitors overall.

Marketing. The use of CNN, Euronews and world travel market/international exhibitions.
Stephen raised concerns at this point that it was not overly clear what audience they were
targeting. When asked they said everyone was advised. Steve highlighted that CNN and
Euronews were not sources generally viewed in the UK, especially by young people. More
needs to be undertaken online through social media and videos. They replied that this was
being done but mainly using Georgia as a brand name and not by different packages,
eg back packers, wine tasters etc. effectively enough.

4 Jonathan Djanogly MP for Huntington spoke of his experience visiting Tbilisi, Kutaisi and Batumi saying that Georgians were looking to the west rather than the east for trade and work.He had been to Georgia as part of the UK parliamentary Georgian all-party committee. He referred to Adventure Tourism including walking in the national parks of the Caucasus region, camping & skiing. He hoped that more British would start to visit Georgia – the new destination in Europe.

5 Helen Farrell spoke on “ Sustainable Tourism” .
Ms. Farrell talked about community participants as being the core of any development.
It was rural Georgia that tourists were being drawn to; being so attractive it was the very
reason they wanted to visit. But the rural communities will have to be prepared to embrace
such development of tourism but this won’t happen overnight. It was important that the development of hotels and facilities did not change the face of Georgia.

6 Alistair Watson – An athlete who had completed a marathon in Tbilisi gave his personal reflections as a sportsman in Georgia supported by a delightful power point presentation. Only one marathon is staged in Georgia but even this could be promoted in other countries.​

7 Go Barefoot Travel & Original Travel Co – an interesting presentation reinforcing many points that had already been made about tourism in Georgia.
Go Barefoot is an interesting project looking at having trails/walks through the Caucasus mountains with Tbilisi excursions. This project is in the early stages and being led by a UK
company.

9 Michael Bloom – personal reflections as a tourist in Georgia. Married to a Georgian he regards himself as an honorary Georgian. He shared his holiday photographs of a recent trip.

10 Jason Osborne – reported on the Georgian Film Festival.
There are more films being produced in Georgia which is very much welcomed. 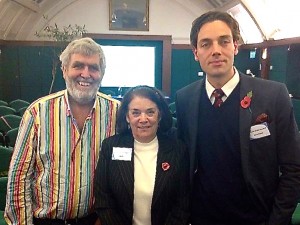 11 The Town/City TWINNING REPORTS
For the first time Bristol and Newport were joined by Newcastle who have links with manytowns and cities around the world who share their name of Newcastle, includingAKHALTSIKHE a small city in Georgia’s southwestern region.

BRISTOL reported on their past successful year holding a trade fair in the centre of Bristol and also funding a Georgian street artist to come to Bristol. The artist was asked to paint some pictures on canvas which were auctioned and enough money was raised to cover his expenses.

NEWPORT Sonia Fisher and Stephen Marshall gave a joint presentation of NKTA’s
activities over the past year that included:

There followed a wine reception where there was the opportunity for Sonia and Stephen to
meet and speak with the Ambassador, delegates & friends. Appreciation was expressed
for the continuing friendship with Georgia especially with the city of Kutaisi.

Stephen Marshall commented:
Overall a really good event – very interesting and informative on how Georgia is focusing on making itself the place to go, more so now than ever. The country of Georgia is becoming well known by many due to sport such as the Rugby World Cup and football. 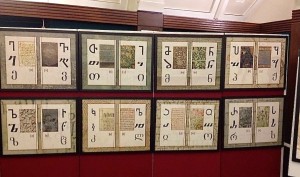 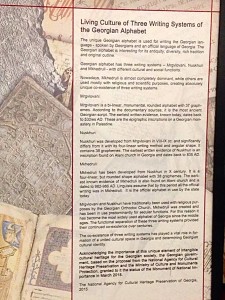 For fuller accounts and pictures of all NKTA’s 2015 activities see below
under Latest News.