Meeting with members of the Georgian Rugby Team

Posted on October 7, 2015 by Catherine Philpott 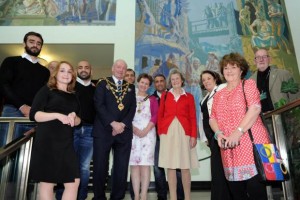 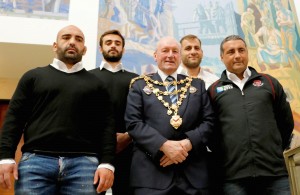 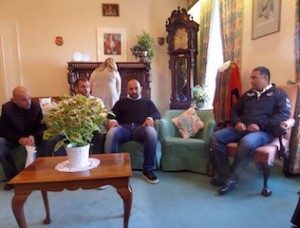 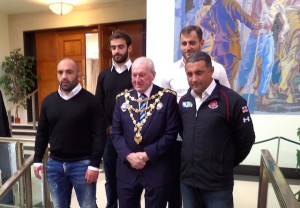 The Lelos had been training at Newport High School and staying at the Celtic Manor Resort Hotel in preparation for their first ever tussle against the mighty All Blacks at the Millennium Stadium.

The reception at the Mayor’s parlour in Newport’s Civic Centre was very significant because of Newport and Kutaisi’s very special twinning relationship.

Lock Giorgi Begadze and from Kutaisi, prop Irakli Nariashvili, wing Giorgi Pruidze & Giorgi Nemsadze were all in attendance alongside assistant coach Michael Bradley to meet, not only the Mayor and Mayoress, but the Association’s Chair Sonia Fisher, Vera Brown, Derek Butler, Vika Tegelbeckers and Catherine Philpott.

In a lively meeting, both parties discussed Georgia’s growing stature in world rugby and the pride both cities shared in being twinned with each other.

Presents were exchanged, with the Georgians presenting the Mayor with a team tie and plaque.

Assistant coach Mr Bradley, who won 40 caps for Ireland as a player, said: “For all the people of Kutaisi, it’s fantastic to have connections all over the world. Keep it up and keep supporting Georgian rugby.”

The Mayor of Newport said that he had learnt much from meeting members of the team and had found out a little more about Georgian rugby that he hadn’t previously known. ‘As Kutaisi is our twinned city, we do not miss any match of the Georgian team; we support them and glad that our friends from Kutaisi are with us today. This day is memorable and will become part of our history.

The Millennium Stadium in Cardiff can hold 75,000 fans. I have information that 5,000 fans have arrived from New Zealand. I assure you that the other 70,000 people will support the Georgian team!’.  Chair, Sonia Fisher, added: “Sport is a wonderful way of crossing boundaries and making friends.”

Later in the week the team went on to play a very commendable match with New Zealand who won by 43-10. Headlines in the press declared ‘All Blacks stutter to unconvincing win……’ Telegraph. The good quality of rugby played by the Georgian team was widely recognized by the pundits.