Following an invitation from the Mayor of Kutaisi early in 2015, Rosemary, Caroline and Derek, together with Madonna and KNIA members, spent over a year organising the visit; part of the celebrations for the 25th Anniversary of the signing of the Twinning Agreement.

The visiting group consisted of 16 people including the Bishop and Dean of Monmouth , the Artistic Director of Ballet Cymru, the East Area Commander of Gwent Constabulary, the Deputy Dean of USW, the Chair of Governors of Coleg Gwent and three senior academic staff, the Secretary of the Aneurin Bevan Health Trust and a senior Consultant Nurse, the Director of Newport YMCA , Sonia fisher chair of NKTA and NKTA executive members Rosemary, Caroline and Derek.

Individual group programmes were organised during which the visitors discussed matters of common interest and areas for future co-operation and this serious aspect of the visit ran alongside interesting visits and many opportunities to enjoy unrivalled Georgian hospitality and good company. During the visit Caroline was formally presented with the Honorary Citizenship of Kutaisi in recognition of her outstanding contribution to the twinning over the past quarter of a century and the NKTA wishes to congratulate Caroline for this well earned honour.

NKTA presented the city of Kutaisi with a commemorative plaque which was unveiled by Sonia and the Mayor of Kutaisi. The plaque is situated in Newport Street.

Some of our members enjoying the informal networking after the informative talk the Mayor of Kutaisi and Professor Madonna Megelishvil were both presented with certificates signed by the Mayor of Newport and the newly elected Leader of Newport City Council Debbie Wilcox thanking them for the invaluable contribution they have made to the twinning. The two Kutaisi youngsters who will visit Wales in October for the Wales v Georgia football match (funded by GOL and hosted by the NKTA) together with an accompanying adult, were selected by NKTA members from a short list prepared by KNIA members.

The visit was hugely enjoyed by everyone, especially those visiting Kutaisi and Georgia for the first time. The possible outcomes from this visit are still being considered and discussed but undoubtedly the visit was an important milestone in the friendship between our two cities.

On behalf of NKTA, the chair would like to thank Rosemary, Caroline and Derek as well as the Mayor of Kutaisi and our KNIA friends for making this visit possible 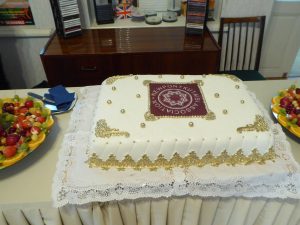 Cake to help celebrate 25years of the twinning between the two cities. 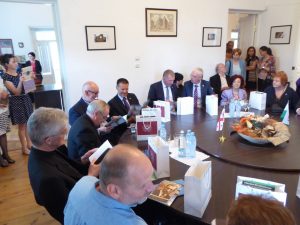 Members of the Civic Visit receive gifts from the Kutaisi hosts 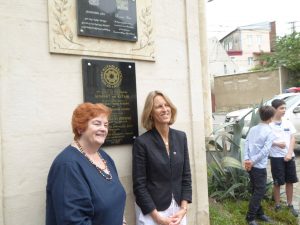 Dame Rosemary Butler and Her Excellency the British Ambassador to Georgia, Alexandra Hall 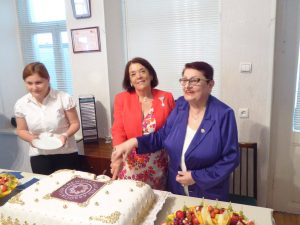 Chairs of NKTA and KNIA 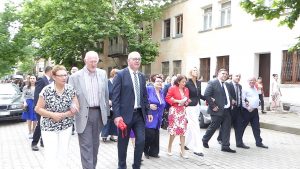