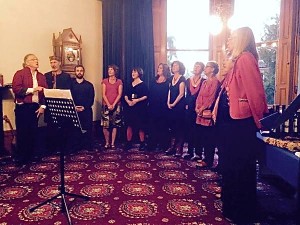 Both the Georgian Ambassador and Romanian Ambassador were present. The Bristol Georgian Choir gave a wonderful concert followed by an auction to help raise funds for the Tbilisi Flood Appeal.

collected by NKTA members and friends from Sonia Fisher.

The Georgian Ambassador expressed his thanks to all members who donated to the appeal fund and supporting Bristol Tbilisi Association in cooperation with the British Embassy in Tbilisi.